My artwork maps the transformation of political attitudes and relationships that have evolved through the intertwining histories of socialist and liberation activism in the United States and Los Angeles.  My extensive research and visual art recover these suppressed social histories, and connects them with present social struggles. My work moves between producing diagrams of these histories, drawings that interpolate my engagement with historical information and ephemera, systemic color field maps, activist portraiture, flyers, and future-oriented pieces.

Most of my work is informationally or semantically organized by political line or position within the visual field. For example, if an organization trends toward a more politically conservative ideology, its line will move to the right of the visual field. The diagrams are catalogues of research based political relations that cannot be found through any other single artwork or political resource.

2008
The “CAB” sculptures reflect my interests and research into Neoclassical and Visionary continental architecture and furniture, and how these grammars filtered into 20th Century American lexicons of auto design, modernist sculpture, sci-fi spacecraft, and military architecture.   Generated in the post- 911context, the CABS translate all these influences into new forms.   Their hand-polished pearl white exteriors were chosen for a luxury car-like quality, a sense of dignity, a superficial lightness that complements the object's heavy physical weight, and its ability to elicit utopian associations.  Each sculpture may be encountered as an expanded or closed object, thus exploring associative realms of the holistic, transforming, or ruptured container.  Parallel to auto design prototypes the sculptures suggest functionality and question it at the same time.  As unique objects both design prototypes and the CABS are autonomous, existing at the core of any symbolic or potential re-production.

The CABS are the products of our post- 911era, filtering our attitudes into form itself. In a back-to-the-future manner, I was particularly intrigued by Democratic philosophies and the proportional logics of the human body that were embedded into the formal grammars of ancient Greek and Roman Classicism.  Classicism and its descendent  Neoclassicism have, however, mixed historical legacies.  While their forms may embody ideals of honor, civic virtue, and democracy, they also symbolize autocratic political power, personal luxury, and ostentation. Classicism strangely accommodated for all of these philosophical manifestations through its own form of entropy-- the poetic tragedy. 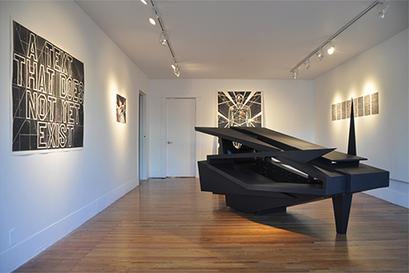 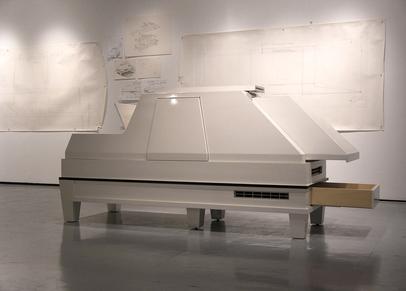 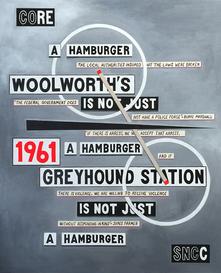 2012
The Stealth Space work engages the dialectic between the near and far, and what is mediated versus seen and experienced through the body. Stealth Space is about different perceptions of space and time mediated by the inhabitable Stealth Vehicle sculpture and its related two-dimensional work within the gallery context. The conceptual premise of the Stealth Vehicle sculpture is that any space existing beyond its own physical limits is deemed as ‘outer space’-- hence positioning itself in relation to the sensibility of the gallery as a ‘non-site.’ The image sources for many of the space collages are super-close up photographs of the materials used in The Stealth Vehicle.  The gallery, along with a participant’s engagement, acts as an instrument to facilitating connections to the beyond.  Stealth Space is grounded in American secular progressivism of the 1960s, Marshall McLuhan’s sensibilities of mediated consciousness, and Space Age adventurism.